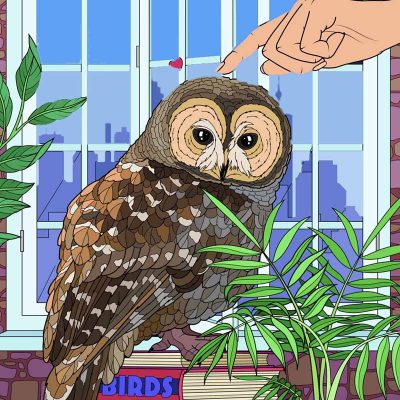 Carol Granger sang along with the radio as she cheerily puttered around her kitchen. Today was the last day of her sabbatical. Tomorrow Hermione would go back to school — the Tutors were arriving a week early for an orientation — and Carol would return to the dental practice she shared with her husband, Peter.

It had been touch-and-go there for a while, trying to explain their sudden and complete disappearance to their patients, landlord, and the government. Finally the Ministry of Magic modified the memories of everyone involved so that they thought the Grangers had arranged everything well in advance.

Carol and Peter didn’t feel the passage of time from their missing year, but Hermione did, so they’d agreed to turn their fake sabbatical into a real one and spend the summer with their daughter (and, increasingly often, her wizard boyfriend, Ron.) The Grangers had just one more activity to enjoy before they reopened their office: they were flying to Reykjavik in the morning for an international dental conference. Carol couldn’t wait.

Carol’s silvery hair was cut in a modern shag and crowned with a pair of reading glasses. She wore jeans and a bright orange t-shirt with white lettering that read “Owl Patrol.” Ron thought it was hilarious. Hermione was not amused. But that really had been Carol’s purpose for the past few weeks, ever since Hermione had officially become a Hogwarts Tutor: intercepting owl after owl that arrived day and night from friends, shops, and especially from Hogwarts.

So many messages from Hogwarts! Except, of course, for the message that really mattered, the one upon which Hermione impatiently awaited. The one that would tell her how she was getting to Hogwarts, and where she would be living once she arrived.

Carol checked the clock. 10 seconds to 9am. At 9am, the business owls would begin to arrive. And so would….

CRACK! Right on schedule, Ron Weasley appeared. He clutched a fistfull of scrolls and had an eager look on his face. Hermione’s voice came from upstairs.

“Ron! You can’t just Apparate into the kitchen! You’ll scare my mother!”

Ronald had wholeheartedly adopted the youth craze for fancy coffee. Hermione had tired of making it with her wand, so the Grangers now owned a sleek silver cappuccino machine.

“Excellent! Thanks, Mrs. Granger!” He grabbed a muffin with his free hand, and through an enormous mouthful, shouted, “‘Ermione! Got my shudor packish! Didshoo get yours?”

Hermione raced down the stairs.

Ron gulped and thrust his papers at Hermione. “Tutor packet! Did you get yours?”

Hermione turned to her mother. “Any owls, Mum?”

“Not since last night, but they should start up again any mom….”

There was a rap at the window. Hermione turned expectantly, but Carol shook her head. She recognized the owl.

“Sorry, dear, but this one’s from Flourish and Blotts.” She admitted the owl, took it’s scroll, gave it a treat, and sent it on its way.

“Wow, Mrs. G! It’s amazing how you can tell all those owls apart.”

“I’ve had a lot of practice,” Carol replied. Hermione was a prolific letter-writer, and she ordered a lot of things by owl-post.

Hermione looked disappointed, but she asked Ron, “What do your papers say?”

Ron got excited again. “I’m bunking with Seamus. We’re down in the basement, next to the kitchens!”

“Did you hear me Hermione? NEXT TO THE KITCHENS!” Ron swallowed another mouthful of muffin and rapturously addressed the ceiling. “It’s like all of my dreams came true!”

Carol laughed, but Hermione just absently said, “Yes, yes, that’s very nice,” as she shuffled through Ron’s messy papers. “Does it say how we’re getting to Hogwarts?”

“I dunno,” said Ron, hitting the start button on the coffee machine. “I stopped after the dorm part.”

Hermione’s exasperated reply was drowned out by the sound of grinding coffee beans. She unwound a scroll, stopping when she found the relevant part. Over the din she shouted, “They’re sending a portkey to each of our homes!”

“Really?” shouted Ron in return. “Excellent! Beats dragging our trunks to the train!”

When the grinder stopped, two loud cracking sounds echoed through the kitchen. They all immediately looked at the machine, but a moment later, the doorbell rang.

“Someone must have Apparated into the yard!” exclaimed Hermione. “Maybe they’ve brought the portkey!”

She eagerly ran to the hall. Carol heard some conversation over the sound of the milk steamer, and then the delicious smell of food started to fill the house. Ron turned away from the machine and said, “I wonder what’s going on?”

They quickly found out. Looking rather uncertain, Hermione returned, leading the way for two young women who were carrying several large bags and boxes that were the source of the lovely odors.

The two girls looked so much alike that Carol assumed they were sisters. They both had very dark skin, and black hair that was pulled back from their faces. One had a ponytail that ballooned out behind her in a curly cloud, while the other wore her hair in two round puffs at the top of her head. Both of them were dressed in trendy low-slung jeans and cropped blouses.

Ron looked surprised to see the girls, but he took some of the bags, saying, “Davis, what are you doing here? And what’s with all the food?”

Hermione helped to put the rest of the bags on the counter and said, “They have our portkeys. Mum, this is Tracey and Trina Davis.”

“Pleased to meet you, Mrs. Granger,” said the girl with the hair cloud. Her sister looked a little overwhelmed, and just nodded. “These are for you,” continued Tracey, indicating the food.

Carol didn’t recognize the name Tracey Davis. She supposed that Hermione hadn’t interacted with her much at Hogwarts, because Hermione had described many students in detail, whether they were nice or nasty.

“Professor Sprout said that when you visit Muggles, you’re supposed to bring something. We didn’t know what Muggles like to eat, so we brought a little of everything.”

“You sure have!” exclaimed Ron.

It was certainly an odd assortment of food. There were French crullers, fish and chips, tikka masala, egg fried rice, a pork pie, a pan of lasagna, and a Bakewell tart.

“Well, thank you very much,” said Carol, hoping the girls wouldn’t notice that she had no idea what she would do with all of that food. Did they expect everyone to eat it now?

“I told you this isn’t want Muggles eat for breakfast!” whispered Trina loudly to her sister.

“Oh, that’s quite all right!” said Carol, relieved that she didn’t have to eat lasagna at 9am. “We can just pop it into the fridge for later. Ron?”

One of the advantages of feeding Ron was that he happily did all sorts of chores in return (something that Mrs. Weasley had trouble believing when they’d met in June.)

As Ron stowed the food, Tracey examined the room.

“Is this a typical Muggle kitchen?” she asked. “I’ve never seen one before. I didn’t know they were so…. shiny!” She ran her fingers over the stainless steel sink.

“I don’t know if it’s typical,” replied Carol, “but it’s modern. We redid it a few years ago.”

Tracey added, “It looks like the new common room.”

Hermione looked perplexed. “How will I see the Slytherin common room?”

“Didn’t you see the map in the Tutor packet?”

Tracey huffed. “Stupid school owls. I only got mine when Sprout gave me the portkeys to distribute. Speaking of….”

She reached into a pocket of her jeans, which were so tight that Carol couldn’t imagine how she could have anything in them, but she must have used the same extension spell that Hermione liked to cast on her book bag, because from her small pocket Tracey drew two metal badges with the Hogwarts crest. They were similar to Hermione’s prefect badge.

“These are your Tutor badges,” said Tracey, handing them to Hermione and Ron. “They’re also your portkeys. They activate tomorrow at 9am. Make sure all of your luggage is touching, then touch the luggage, then the badge, and everything will be transported to Hogwarts.”

A hissing sound reminded Carol that the cappuccino maker was ready for its final cycle.

“Would you like some coffee?” she asked Tracey and Trina. “This makes all the fancy cappuccinos.”

“But what did the packet say about — ” began Hermione.

She was interrupted by tapping at the window. Carol recognized the owl. It was from Hogwarts, and it was carrying several scrolls. She said, “I think this is the owl you’ve been waiting for, Hermione.” Hermione ran to the window.

“Bye!” said Trina, surprising Carol, who’d been wondering if she were too shy to talk. Maybe she was uncomfortable around Muggles. Some wizards were.

“Good luck with your new program!” said Carol. “And thank you for the meals.”

“Yes, thank you,” said Hermione, who had finally untied the scrolls from the owl. “See you tomorrow!”

There were two loud cracks as Tracey and Trina disapparated.

Hermione sent the owl on its way. Scrolls in hand, she headed for the living room. “I’m going to sit someplace comfortable and organize these,” she said.

Ron headed to the fridge. “Want a cruller, Mrs. G?”

“Oh, why not,” said Carol. “I wonder if we can salvage this cappuccino.”

There was a shriek from the living room.

Carol and Ron looked at each other, then made for the door, but before they took more than a step, Hermione came rushing in, eyes wild over a long parchment that she clutched in both fists.