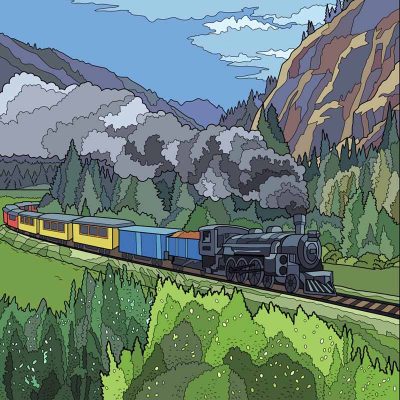 Serena Serpentia arrived at Platform 93/4 by Sifting in perfectly between Tracey and Ginny. Seamus was all pissy about it, but Serena would be damned if she were going to Apparate anywhere ever again, and there was nothing McGonagall could do about it anymore. A few of the loser boys who hadn’t seen her Sift before basically lost their shit, but she ignored them.

She congratulated herself for telling George to buy the stylish Tutor robes for the team captains. Ginny looked good and didn’t refuse it as a handout.

Then Serena looked around the wider group and frowned. Why was Granger always so jumpy? And did she never fix her hair? Serena was all for natural hair, but this was ridiculous. But she’d promised Seamus that she’d be nice to his stupid friends, so she tried to say something encouraging.

“Nice tailoring on the robes, Granger.”

Granger turned a little pink, but looked pleased as she replied, “Thank you. I did it myself.”

Did she really? That was mildly impressive. Maybe Granger wasn’t such a lost cause after all.

As Seamus and Ron Weasley came trotting up, Tracey called, “Tutors, follow me!” Sprout had put Tracey in charge of the train assignments. Serena knew what they were, of course; she’d helped Tracey make them.

Tracey led the eight Tutors to a quieter spot on the platform. They gathered in a circle with Tracey at the head.

“All right, everyone,” said Tracey, “here’s what we’re going to do. The Primaries will start to arrive at nine, and we need to get them settled on the train by ten, so that they’re out of the way before everyone else starts boarding. They’re going to be riding in the first four compartments, and each car will have two Tutors to supervise them. But we’re not just riding along with them,” she said in a warning tone. “We’re supposed to get to know them, and answer their questions — you know, make them feel at ease. Each car has a collection of games. You can magically enlarge the compartment interiors to make room for a table.”

Terry Boot looked apprehensive as he said, “I don’t know how to do that.”

“Neither do I,” said Weasley.

Serena managed to confine her exasperation to an eye roll, but Tracey was even more patient.

“That’s okay,” she said, “You’ve all been paired with someone who does.”

Serena mentally gave Tracey a point for forethought, and then gave one to herself for having taught Seamus and Neville Longbottom the undetectable extension charm. Granger really should have taught it to her boyfriend, especially since he was going to be an Auror and all.

Tracey continued, “Now, when the Primaries and their parents arrive, we’ll all have jobs. Weasley and Boot, you’ll handle the luggage. Finnegan and Granger, you’ll patrol for half-bloods who are with their Muggle parents. That way they can talk to someone who understands their questions. Serpentia, Patil, Longbottom, and I will settle the kids in their compartments. Once all the kids are on board, we’ll divide into teams, two to a compartment. Serena’s with Seamus, Granger’s with Weasley, Patil’s with Boot, and I’m with Longbottom. Any questions?”

There weren’t any. Serena felt that the others should acknowledge Tracey’s work.

“Let’s hear it for Tracey’s plan!” she commanded, and the others applauded. Tracey was a good presenter. It was useful, to have someone like that on your side. Serena decided right then to create an eighth-year Charmsnastics exhibition squad, just so she could make Tracey captain. Eighth-years weren’t supposed to join teams, but this group would only exist for entertainment. Flitwick couldn’t object to that.

Tracey warned everyone to stay close to the front of the train because it was almost nine, and the circle dissolved. Serena headed toward the first set of stairs, and Seamus fell in step next to her.

“Glad you came now?” he asked.

“Sort of,” she admitted grudgingly.

Seamus grinned. “You are, indeed.”

He reached out and took her hand. What the hell…?

Serena was so surprised she stopped in her tracks. Really? He thinks they do this now? In public? But she didn’t withdraw her hand.

Seamus looked her in the eye. “You ready?”

Serena surveyed the platform. The Tutors were fanned out. The Prefects and Captains were starting to arrive.

She wasn’t Head Girl anymore, but maybe, as a Tutor, she was something greater.

She had students of her own. She coached the captains of teams.

It wasn’t ideal. It wasn’t UMCLA. But it was… acceptable.

She turned back to Seamus, her hand still in his.