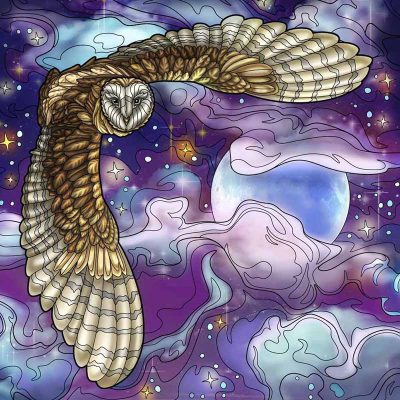 The gentle rumble of the surf was restful to the ears of the young man whose dress shoes were filling with sand, and the soft wind felt good on his face. The air smelled wonderfully fresh after the stench of the cursed smoke that blanketed Hogwarts during the Great Battle. It would have been the ideal southern California night, but these were not ideal circumstances. From inside the massive, angular glass house behind him came the sobs of a woman and the reassuring murmurs of a man.

Asmo Serpentia pulled uncomfortably at his tie, loosening it. He suspected that most American wizards were getting ready for bed, unaware that their counterparts in the UK were celebrating their first day of complete freedom from the despotic dark wizard Voldemort. But the woman crying inside was not from America, and Asmo, her nephew, had brought her some bad news: her old friend, a Hogwarts professor, had died, and her daughter, a Hogwarts student, was missing.

Asmo heard the great glass patio door slide open, then shut, and footsteps descended the wooden stairs that led to the beach. His uncle, a middle-aged man with greying, curly hair and fashionable round spectacles, walked up beside him.

“Your aunt’s not taking it well,” said the older man.

“I heard,” said Asmo. He took a deep breath of the salty breeze and watched the ocean, his fists clenching in the pockets of his expensive trousers. “It’s a shame. Snape was a cool dude.”

They were silent for a moment; then Asmo said angrily, “What the hell is taking Bel so long? He’s supposed to go back to Hogwarts with me to look for Serena.”

“What’s he doing?” asked his uncle.

Asmo laughed humorlessly. “He wanted to hit Wiltshire before the mobs. Rumor has it the Malfoy’s have an ancient elven mirror.”

His uncle made a thoughtful frown and nodded his head, as if this were something worth investigating. “I’ll be very interested to know what he finds.”

Asmo was appalled, and it showed on his face. He kept his mouth shut, though, mashing his lips into a thin line and kicking the sand at his feet.

“Nothing,” mumbled Asmo. He kicked the sand again.

“I’d just like to know why I’m more worried about Serena than you are!”

His uncle looked irritated. “Serena’s fine. We got a message from the school. They sent all the Slytherins away before the fighting even started. If I know my daughter, she’s in Hogsmeade, bitching about the food. Just bring her back here when you find her. And bring that Irish kid with you, too. It’s time we knew if he’s going to amount to anything.” He turned abruptly away and walked purposefully back up the stairs and into his house.

Asmo stared after him, feeling angry and frustrated. “Okay, Uncle Sidney,” he muttered under his breath.

He turned back toward the ocean, which didn’t calm him in the least. He felt inexplicably even more annoyed when a shower of red sparks caught his eye, and another young man in a stylish suit appeared from the darkness. The newcomer was impossibly handsome. His smile shone brightly in the moonlight, and there was a self-satisfied gleam in his eye.

He made a little bow in Asmo’s direction and said, “Ready, cousin?”

Minerva McGonagall stood on a ruined balcony, a row of owls sitting on the wide stone railing before her, reading message after message in the early morning light. As she removed each scroll from an owl’s leg pouch, it flew away, only to be immediately replaced by one or two more. Minerva would have preferred to sit in her office, but this was the best way to accommodate the parade of birds while simultaneously addressing a steady stream of teachers, students, and parents.

Her good friend Pomona Sprout, head of Hufflepuff House and now her deputy headmistress, appeared beside her, carrying a glass of pumpkin juice.

“Here, Minerva,” said Pomona. “Take a break. The Ministry can’t expect you to keep track of every single thing they send.”

Minerva stowed the latest scroll in the pocket of her robe and took the glass. “Thank you, Pomona. Have you talked to the seventh years, the ones who remained?”

“Yes, and I’ve owled the rest. Some of them are very enthusiastic about staying to repeat their coursework in preparation for their N.E.W.T.s. Others….”

“Well, I can imagine,” said Minerva. “Right now all they want to do is see their families. Will any of them stay on for a few weeks, to help rebuild the school?”

A flock of a dozen more owls descended on the porch, hooting and screeching.

“Really!” exclaimed Pomona. “What’s wrong with the Ministry? Don’t they know we have far more important things to do than read their bulletins?”

“These aren’t Ministry owls,” said Minerva darkly. “I’m getting dozens of notes from parents who can’t locate their children, and from students who haven’t been reunited with their parents.”

“Yes, but in the case of some of the Slytherins, the parents have been arrested, and no one can locate other family members.”

“Speaking of Slytherins, Asmo Serpentia was here earlier, looking for Serena. I told him all the Slytherins were sent away before the battle, but she seems to be missing, and he felt certain she would be here.”

Minerva took a long sip of her juice. She didn’t like to spread rumours, but perhaps the staff could discover whether this one were true.

“I have heard something….”

“Neville Longbottom told me that he heard Serena Serpentia was killed in the battle.”

Pomona looked wary. “Where did he hear this?”

Minerva’s face was grave. “Straight from the mouth of Bellatrix LaStrange.”

Pomona’s hands flew to her face. She had always liked Serpentia. “Oh, I hope it’s not true! I can’t believe Serena is dead….”

Professor Slughorn came huffing across the balcony at a laborious jog, his walrus moustache puffing with each breath.

“How do you know?” asked Minerva, as Slughorn approached them.

“Because of a …” he stopped to cough. “Because of a little problem we have — forgive me!” He wheezed as he gasped for air.

Impatiently, Minerva asked again, “How do you know that Miss Serpentia is alive, Horace?”

Slughorn finally took a great breath. “Because we have a bit of a situation in the dungeons, Headmistress, and it has Miss Serpentia’s hand all over it.”

A small group of students sat around a table in the rubble-strewn Great Hall.

“I can’t believe it!” said Padma Patil. She turned to her sister, who was in tears. “Where did you hear it again?”

“It’s so unfair!” cried Parvati. “After all Serena did for us, I’ll bet it was someone from our side who killed her!”

“I’m not so sure,” said Neville. “The other side might’ve figured out what she was up to.”

“Up to what?” asked Anthony Goldstein. “I mean, sure, she sent us to homework detention instead of turning us over to the Carrows….”

She did more than that,” said Neville. Parvati and Michael Corner nodded in agreement. “Remember when me and Seamus covered these walls with Dumbledore’s Army graffiti?”

“Well, it almost didn’t happen. Serena caught us at it. She was really angry. I thought it was because they punished the prefects whenever we did it, but it turns out she was offended by our bad artwork. She was funny that way. Anyway, she sent us back to Gryffindor Tower. I thought she was going to clean the walls, but the next morning… well, you remember. It was all there, and ten times brighter.”

“I don’t understand,” said Padma. “Serena worshipped Snape. Why would she make trouble for him?”

“Dunno,” said Neville. “I guess she hated the Carrows more than she loved Snape.”

“Because they’re friends, sort of.”

“It’s true,” said Parvati. “Their mums are very good friends. They see each other all the time when they’re not at school.”

Running feet and excited shouts echoed from the entrance hall. Parvati twisted her fingers anxiously. “That’s Dean and Seamus now! How are we going to tell him?”

“No!” cried Parvati fiercely. “He’s our friend. He should hear it from us.”