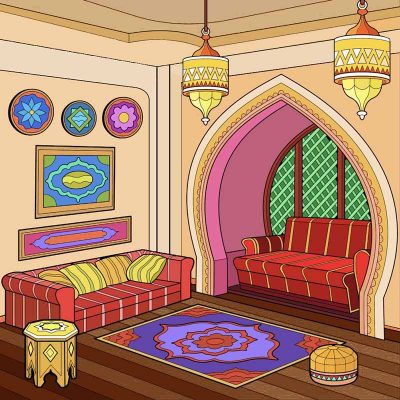 Parvati and Padma Patil sat on the window seat of their bedroom in their grandmother’s penthouse condominium. The building was brand-new, sleek, and modern, but their grandmother had decorated the interior in a traditional manner, with brightly-colored carpets and tapestries, intricately-carved furniture, boldly-patterned upholstery, and light, airy walls. Facing each other, the twins leaned against the wide window frame and looked out over the city lights.

Padma had spent a whole month visiting their grandparents, but Parvati had been too busy preparing her Divination program to spend more than a week in India, and tomorrow morning she had to leave again for Hogwarts, a week before Padma.

“But you got to do so many fun things back home,” replied Padma. “I haven’t practiced Charmsnastics at all, and you did it every day. And you went to Seamus’ Muggle party and met that handsome man!”

As always, thoughts of Bel stirred mixed feelings for Parvati. “You’re forgetting that didn’t go so well,” she replied. “He turned out to be a demon, and Seamus almost duelled him.”

Parvati considered whether ten minutes and a disrupted kiss with the charismatic demon Bel was a better romantic experience than a whole month with the sweet, shy wizard boy that Padma had been dating in India.

“Doesn’t Varun have anything romantic planned for your last week in town?” asked Parvati.

“I’m not getting my hopes up,” replied Padma dryly. “His last special date idea was a Muggle cricket match.”

Parvati’s jaw dropped; then she covered her mouth and giggled. “I think you need to give that boy some lessons!”

“I’m leaving town next week,” said Padma, reaching down and pulling a gossip magazine from a basket next to the window seat. “I’ll let some other girl train him!”

“Anything in there about the Weird Sisters’ tour?” asked Parvati.

Padma flipped through the magazine, but before she could answer, their grandmother’s junglefowl Patronus raced around the room, saying, “There’s a visitor for you, Parvati, a Tracey Davis.”

Parvati exchanged a surprised look with Padma, and sent her peacock Patronus back with an invitation for Tracey to come up. A moment later, there was a loud cracking sound, and Tracey apparated into the room.

“Hi, Parvati, Padma,” said Tracey. “Sorry I’m here so late, but I didn’t realize you were in India.”

“That’s all right,” said Parvati. “Come sit down.” She tucked in her legs to make room for Tracey on the window seat.

Tracey joined them and said, “I’ve got your Tutor badge.” Even though her jeans were tight and she was sitting, she easily pulled the badge from her pocket and handed it to Parvati.

“Thanks,” said Parvati, “but you could’ve given this to me tomorrow.”

“I would have, but when I stopped by your parents’ house, they gave me something else to deliver.”

She pulled a miraculously uncreased linen envelope from her pocket.

“A letter?” said Parvati, taking it from her. “Why didn’t they just send an owl?”

“It’s not from your parents. It arrived by raven. They were going to send it on to Hogwarts, but then I turned up.”

The front of the envelope just said “Parvati Patil.” Parvati turned it over and looked at the red wax seal. When she recognized the design, butterflies exploded in her stomach.

“What? What is it?” asked Padma more urgently.

Parvati wordlessly showed the seal to Tracey. She looked at it carefully.

“Isn’t that the logo of Ophidian Enterprises?”

Padma looked excited. “It must be from the man on the beach! Open it!”

Parvati didn’t know why she was so nervous. Until that moment, she had considered herself well quit of Belial Serpentia. With trembling fingers, she opened the seal and drew out a card. It read,

Congratulations on your new job as a divination tutor. I regret that I misjudged the timing of your return to Hogwarts. I was hoping to take you out for a night on the town. Can I have a raincheck? Maybe for your winter break?

“What does it say?” asked Padma impatiently.

Parvati held the card out so Padma and Tracey could read it.

“And what does he mean by winter break?” wondered Padma. “Is it Christmas break, or our winter visit to Hogsmeade?”

“I think he means Christmas break,” said Tracey. “You can’t have a night on the town in Hogsmeade.”

Parvati read the note again. She didn’t know what to think.

Padma and Tracey looked expectantly at Parvati. “Are you going to reply?” asked Padma.

Parvati put the note back in the envelope and used her wand to send it to her trunk. She leaned back against the window seat and looked out at the people who were spilling into the street from the restaurants and theatres and heading for the clubs.