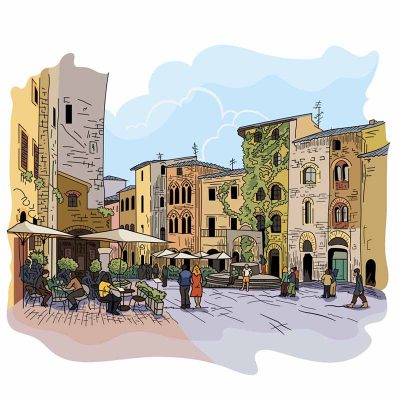 Ron Weasley tried to look cool and casual, despite being enveloped by an overstuffed armchair in the overdecorated lobby of the Ministry of Magic’s personnel department. He was afraid he was failing. If he looked at all like any of the other blokes reclining in their own overstuffed armchairs….

Perhaps he should lower the bar somewhat, maybe from “relaxed” — impossible! — to “not entirely terrified” — technically doable for someone who had recently flown on the back of a runaway dragon. Yet Ron felt he would have far greater success murdering a horcrux than convincing a Ministry headhunter he was Auror material.

Ron jumped a little and said, “Here! I’m here!” before looking around for the source of the voice.

The speaker was kindly, grey-haired witch with a clipboard, who smiled at him and said, “Don’t be nervous, dear. I’m sure you’ll do fine.”

It took a moment for Ron to realize that it was his turn. Ignoring the whispers that rippled around the room at the sound of his name, he rose, gave his robes a final tug, and followed the witch into a ridiculously ornate wood-paneled office, where he saw a paunchy, middle-aged wizard, a stylish young witch, and…. Professor McGonagall? What was she doing —

“Yeah!” said Ron, before remembering his manners and offering his hand to Shacklebolt. “It’s good to see you, Minister.”

“And you, too, Ronald,” said Kingsley, shaking his hand. “I’d like you to meet Andrew Runninheid from the personnel department….”

Ronald shook the paunchy wizard’s hand and said, “Pleased to meet you.”

“….and Ima Ketchum from the auror department.” Another handshake.

“I know you’re wondering what the Minister and I are doing here,” said McGonagall.

“Yeah!” said Ron again, immediately amending his exclamation with, “I mean, yes, Professor, I didn’t expect to see you here.”

Shacklebolt indicated a chair. “Sit down, Mr. Weasley, and we will tell you what’s on our minds.”

An hour later, Ron was striding through Diagon alley, his open robes floating behind him, the breeze ruffling his longish hair. He was eager to tell Hermione about the offer he’d just accepted.

It turned out that the Department of Magical Law Enforcement was very pleased with his actions during the war, even the parts that embarrassed him, like leaving Harry when the Horcrux hunt seemed aimless. Mr. Runninheid praised him for independence of thought, and Lieutenant Ketchum said she was impressed by Ron’s ability to remember and apply things he had learned from a variety of sources.

They were holding a place for him in the 1999-2000 Auror training class. The only requirement he had to fulfill for admission was to finish his N.E.W.T. year at Hogwarts. And Professor McGonagall offered him a tutoring position, supervised by Madam Hooch, teaching the primary years about magical games and sports.

But Ron realized that his news might have to wait until he and Hermione could be alone, because they were meeting Hogwarts friends for lunch. He wasn’t sure who would show up, but certainly Harry would be there, and any mention of careers made Harry very uncomfortable.

Ron’s mum was worried about Harry, who spent all of his time wandering from place to place, never settling anywhere, nor making any plans, but Ron thought that this was exactly what Harry needed. As the summer progressed, Harry turned up at more get-togethers, and Ron thought this was a better indicator of mental health than turning up at career fairs.

Ron was hoping he wouldn’t run into Seamus, and especially that Seamus wouldn’t bring Serpentia. Bill was still investigating the tea party incident, and he had warned Ron not to mention anything about demons to anyone, not even to Harry and Ginny, but after six weeks Ron wasn’t sure he could hold his tongue any longer.

As he approached the cafe that was formerly Fortescue’s, Ron was relieved to see that Seamus was solo, sitting between Dean and Harry, and when Seamus stood to gather more chairs, Ron was very glad that Seamus had turned up. He roared with laughter at Seamus’ ridiculous olive green trousers, which only reached to his knees and were covered with dozens of pockets.

Seamus rolled his eyes and said, “Aw, not you as well, Ron? And your dad head of the Muggle Liaison Office now?”

“Don’t blame those on Muggles!” exclaimed Dean as they seated themselves again. “At least not on British Muggles.”

“Seamus’ been visiting the States,” explained Harry. “Apparently it’s so expensive there that he couldn’t even afford a full set of….”

“So that was grand!” said Seamus loudly as Harry and Dean burst into laughter. Ron got the feeling they had been laughing for some time.

Ron looked up to see Hannah and Neville arrive. They were followed a moment later by Luna. Dean rose and offered her a chair, and Ron was surprised when they kissed before sitting back down.

That set Harry and Dean off again, prompting Hannah to say, “I think some of us are already into the ale.”

“Speaking of attire,” said Seamus firmly as he rounded on Ron, “why’re you kitted out like the Minister of Magic?”

“Job interview,” said Rob, not wanting to elaborate further, but Harry asked, “Yeah, how did that go?”

“It was great,” said Ron, “but…” He thought fast. “I promised to tell Hermione first. Where’re Hermione and Ginny, anyway?”

Hannah looked a little worried as she said to Neville, “Perhaps they don’t know where to meet. Did you tell them Fortescue’s, or Potage and Pudding?”

“No one’s ever going to call this place Potage and Pudding, I don’t think,” said Neville. “It’ll always be Fortescue’s to us.”

“I don’t know….” replied Hannah, “They do have an entirely different menu.”

Dean leaned away from Seamus as he said, “You should have told them ‘the place with the funny trousers,’ because I’m sure everyone is talking abou…. aaack!”

He dodged a jet of water from Seamus’ wand. As he laughed, Ron felt a surge of affection for his friends, Seamus included. Surely there must be some mental reason he’d been dancing with Serpentia. Seamus was too good a bloke to mix with demons.

The Hogwarts friends were well into their appetizers and there was still no sign of Hermione and Ginny. The group decided that Ginny was forcing Hermione to buy fashionable summer robes for the upcoming Quidditch World Cup in Zanzibar, but Ron privately thought that Hermione had hidden herself in Flourish & Blotts. He hoped she’d get him a copy of the new Auror Horror, even though he knew she was likely to package it with something educational.

However, when Luna spotted Ginny at the gift shop across the square from Puddings, she wasn’t with Hermione, but rather… Tracey Davis and Rebecca Runcorn? Ron was immediately concerned. Davis and Runcorn were Slytherins, and Runcorn’s father may have been a Death Eater. Were they harassing Ginny? No… she looked completely calm. In fact, she was smiling as she exchanged little flat packages with them.

“What the bloody hell is she doing with them?” he mused, more to himself than the group.

He was surprised when Hannah said quite matter-of-factly, “Oh, Ginny probably hopes to head up the seventh-year Charmsnastics Team.”

It took Ron a moment to realize that Hannah had said “Charmsnastics” and not “Quidditch.”

“The what?” He looked at Harry, who said, “Charmsnastics, Ron. It’s all she ever talks about now. Haven’t you noticed?”

“No, I bloody well haven’t noticed! I don’t even know what it is.”

“Yes, you do,” replied Harry. “She and Parvati are always at it in the garden.”

“That mental dancing stuff? It has a name? It has a team?”

Ron felt irritated, although he wasn’t quite certain why. “How come you didn’t tell me about this?” he demanded of Harry.

Harry looked startled by Ron’s reaction. “Honestly, Ron, I don’t see why you’re fussed. Ginny loves sport, and you can’t practice Quidditch in the winter, can you? What’s the harm in it?”

Neville said, “That’s because you haven’t given it a try. Charmnastics was truly the only bit of fun we had last year.”

Luna piped up, “It’s quite imaginative.”

Ron scowled across the square at Davis and Runcorn and said, “Okay, so you all think it’s a laugh, but what do Slytherins have to do with it?”

He was faintly alarmed when Hannah replied, “Well, it was actually the Slytherins who introduced it.”

Before Ron could reply, Neville added, “I hadn’t heard of it, either, until the day Serena got rid of Binns.”

“WHAT????” shouted Harry and Ron simultaneously.

As shocked as Ron felt, a small part of him was relieved that Harry was surprised, too. Apparently this was also news to Dean. “Binns is gone?” he exclaimed.

“What do you mean, she got rid of him?” asked Harry. He turned to Seamus. “Did you know about this?”

Seamus looked embarrassed. “Well, now….” he began, but then lapsed into silence.

Glancing back and forth between Ginny and his friends, Ron demanded, “Will someone please tell me what in the name of Merlin’s saggy left nut happened to Binns?”

It was Neville who replied. “It was like this. We all had to take History of Magic last year, with a new textbook that was written by the Carrows. It was obvious that Binns couldn’t follow the new curriculum, but I don’t think the Carrows cared — they just wanted us to memorize the anti-Muggle lies in their book. But then one day, Binns got really frustrated.”

“Binns got frustrated?” interrupted Dean. “I didn’t think that were possible.”

“He did. He went on a rant about how everything in the book was nonsense. And there was a lot of nonsense in the book about evil Muggles, but Binns was especially upset about things that were actually true, like the First Wizarding War and Voldemort. Finally Serena stood up and said, ‘It’s not nonsense; you just haven’t heard of it because you don’t know anything that happened after you died.’”

“You should have seen the look on Binns’ face,” said Hannah. “He had no idea!”

“Yes!” said Neville. “He didn’t know he was a ghost! Can you believe that? He said, ‘I died?’ Then he asked Serena what he should do!”

Neville continued, “So Serena said, ‘Isn’t there some kind of light you can go to?’ And Binns seemed to see something in the corner, although we couldn’t, and he said, ‘Why, yes! There is!’ And you know Serena — she has no sympathy for anyone. She just said, ‘So go already!’ Like he was wasting her time! And he…. went.”

“On….” said Harry quietly, staring off at something in the sky.

Something in his voice drew the attention of the entire table. When Harry realized that everyone was staring at him, he looked at Ron and quickly amended, “I once talked to Nearly-Headless Nick about ghosts, and he said he didn’t know anything about death, because he had been afraid to move on, so he remained on earth as a spirit.”

While Ron was digesting this information, Dean said, “That must have been so weird.”

Neville said, “That’s nothing compared to what happened next.”

Ron noticed Neville and Seamus exchanging glances, and was overcome by curiosity.

“So?” he demanded, “What the bloody hell did happen next?”