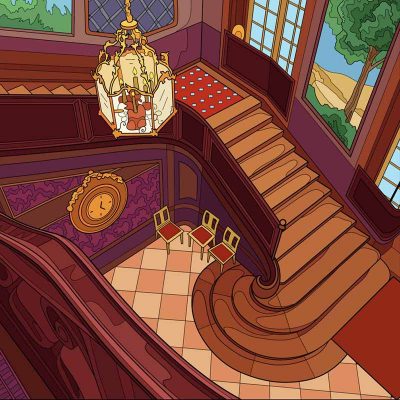 Mixie Elf caught a glimpse of herself in the tall hallway mirror, and stopped to straighten her tunic and leggings. She frowned at their fading colors.

It used to be fun to wear Serena’s old clothes, but Serena hadn’t been Mixie’s size in years, so Mixie hadn’t worn a new outfit in years. This was nobody’s fault but her own, because the Serpentia family owned a number of magical shops; Mixie just had to go and pick something. But Mixie didn’t understand fashion the way Serena did, and the Missus was no good for that at all. Mixie didn’t want to make a style faux pas, so she was waiting for the right time to ask Serena to take her. Last year was no good. This year didn’t seem any better.

Klixie the chambermaid and her brother Slixie the footman came barreling down the hallway with two large trunks. Serena was taking an extraordinary amount of things to Hogwarts this year. Even with magically-enlarged interiors, there was more luggage than ever. And it all had to be packed at the last minute, because Serena had only just accepted positions as the Potions Tutor and the Coach of the Charms Teams. She was also supposed to be studying for her N.E.W.T.s, but Mother Elf knew when she would have time for that.

At least the packing was being done at the family’s Wiltshire home, which had come staffed with a large number of British elves. In California, it was just Mixie and a demon laundress.

Mixie popped her head into Serena’s closet room to make sure the young elves were packing carefully, and then headed toward the kitchen. Tonight the Missus was hosting a going-away dinner for Serena, her friend Seamus, and his family, and there was plenty yet to do. She was intercepted by Hixie, the new kitchen maid, who was nervously wringing her hands.

“What are you doing out here?” admonished Mixie. “Is the dining room finished?”

“I don’t know what to do about the table!”

Hixie looked miserable. “But it’s being used! Should I ask Cooxie if I can do it later, during cocktails?”

Mixie scowled at Hixie. “Tell them that the Missus wants the table set, and they should take their plates to the kitchen.”

“Then tell them they should take their homework to the kitchen!”

“Really? Really? Could you be more literal? Just tell them to move!”

“I can’t disturb them! Really, I can’t! Come see for yourself.”

Mixie rolled her eyes as she stomped off toward the dining room. These young elves were too much! Serena was probably using the big table to decorate a robe. She could just take it to the patio.

Mixie looked through the dining room doors and paused. The table was being used, all right.

Hixie came running up behind her and whispered, “So what should I do about the dining room table?”

Mixie turned on her heel and stomped away.