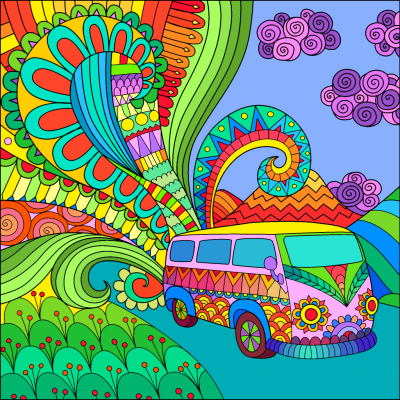 Orla Byrne, her feet on the dashboard and a magimap in her lap, plotted a route while she eavesdropped on the excited teens in her brother’s magically-enlarged minibus. She and Fergus were about to ferry her cousin’s English friends to a beach party on the secluded Glassilaun Beach in Renvyle. Fergus was outside, chatting with some envious mates. She could hear them through the open door.

“So you really have Harry Potter in there, then?” asked Aidan.

“I haven’t yet,” said Fergus, “Just his girlfriend and her group.”

Aiden craned his neck to peer into the bus. Orla snapped open the sunshield, blocking his view. Wanker.

Orla used the rearview mirror to check on her passengers. There was indeed lots of talent there, and didn’t they all look like film stars in their Muggle beach togs? Come to think of it, perhaps they were a bit too perfect; she supposed they had Serena to thank for their costumes.

The pretty little blonde bird sitting with Seamus’ mate Dean was kitted out in green-and-white-checkered clam-diggers and a matching bustier. There was a glamorous Indian girl in an orange and pink bikini top with a matching sarong that wrapped back over her shoulders, but still exposed her middle bits. She was giggling with a friend who had masses of sandy, curly hair, and wore a brown tank suit under a short ivory macrame dress. A tall, excited-looking couple wearing matching cargo shorts and t-shirts from the Cranberries summer tour were talking to Potter’s girlfriend Ginny Weasley, a pale, freckly girl in a blue-and-white gingham sundress that made her hair all the redder.

As it happened, the one witch she’d thought a dead cert to have Muggle dress down cold was sticking out like a sore thumb. Hermione Granger, the Muggle-born who was in all the papers, had the look of a cat in a room full of rockers, restlessly rubbing her bare knees while peering anxiously out the window. She wore a dowdy pair of shorts, a blouse of incompatible color, banjaxed runners, and a straw sun hat jammed over an explosion of frizzy, straw-colored hair.

Orla rose to go see, but by the time she’d reached the door, Harry Potter and Ron Weasley, dressed in t-shirts and board shorts, were surrounded by Fergus’ mates, all clamoring for their attention. Not good, thought Orla. Hadn’t Seamus specifically told them that Potter didn’t like a fuss?

Orla grabbed her wand from the dash and shot out a Patronus in the shape of a terrier, which whipped around the Irish boys at great speed, snapping at their heels while barking, “Away with ye!”

Harry and Ron hurried onto the bus.

“Thanks!” said Harry to Orla.

“Just get yourselves settled,” said Orla. She leaned out the door and shouted, “Fergus! Get your arse in here or we’re leavin’ ye behind!”

A few minutes later they were on the road to the coast. A few of the Hogwarts girls had squealed in surprise when the bus pulled out onto the bumpy dirt drive, but once they hit the smooth pavement, everyone was delighted.

“We’re going so fast and smoothly, it’s like flying on a broom!” exclaimed the glamorous girl.

“This is so exciting!” beamed the tall girl in the Cranberries shirt, squeezing her boyfriend’s arm. “Hermione, is this how you get around when you’re with your parents?”

Hermione started, “Well, not really, because in the city….”

“This is nothing!” interrupted Dean. “My cousin has a Jag, and it flies!”

“It FLIES???” said Ron incredulously. “Without magic? And what’s a jag?”

Orla tuned out the rest of the inevitable conversation about the various meaning of “flies” and turned on the radio. The lively music drew the attention of the curly-haired girl, who asked, “Is that a new song? I’ve never heard it.”

“This is Muggle radio,” said Orla.

“I love it!” declared Ginny Weasley. She jumped up to dance, followed by most of the others.

“Hey, now, I’m not sure you’re supposed to be doin’ that….” started Fergus, “The Muggles might see!”