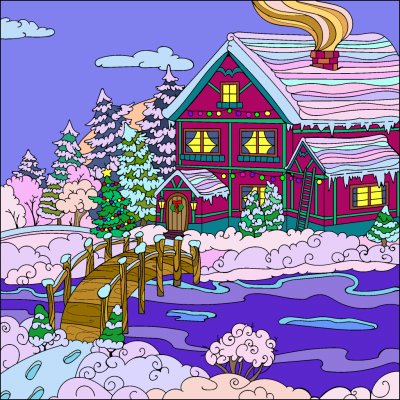 Chaos descended upon the Burrow.

Arthur Wesley, bundled in sweaters and scarves, was happily tinkering in his shed when he heard shouts and whoops, and saw a streak of long red hair whipping by the window. Ginny had arrived! He hurried outside to find Ginny and Charlie racing their brooms at breakneck speed while throwing a quaffle between them. Then Harry appeared out of nowhere and looped around them like a blurry whirlwind as they flew. This couldn’t possibly be safe!

Arthur drew his wand, ready to cushion a fall, only to be blinded by silvery patroni that whipped around him in a sparkly tornado! Arthur staggered in the center of Seamus and Serena’s latest top-volume patronus war until the fox and snake streaked away.

Steadying himself, Arthur made for the house, from which he could hear “A Cauldron Filled With Hot, Strong, Love” — and crashes! And Molly’s “Merlin’s pants!” Wand at the ready, he ran through the kitchen and into the living room, where he found his wife learning a Charmsnastics routine with Ginny’s friends Parvati and Tracey. They were breaking and repairing things in time to the music. Well, mostly breaking, it seemed. He lifted his wand to cast Reparo when,

“Careful!!!” came a shout from outside, and a Christmas tree smashed through the window, ornaments, lights, and all!

“Sorry! Sorry!” came voices from outside. The tree retreated, the kitchen door opened, and a tall, wobbly, green fir, shedding needles, was guided through the air by Ron and Neville.

Ron feigned offense. “Why do you assume it was me, Mum?”

Fleur, wearing an apron and covered in flour, hissed, “Be careful! You’ll get tinsel all over my galettes!”

Molly headed toward the kitchen, but Hannah, also in an apron, said, “We’ll take take of it, Mrs. Weasley. Go on and have fun!” Hannah enveloped the tree with a containment spell and followed the boys as they levitated it to the living room, while Arthur scourgified the kitchen floor. The Charmsnastics music began again, and Arthur could hear the ladies in the living room repairing, and occasionally re-breaking, the window to the beat.

Just as he had vanished the last needle, there was a clatter in the in the broom shed, then bangs at both doors. Harry, Ginny, and Charlie burst in from the garden, red-cheeked and laughing.

“Tergeo! Tergeo!” cried Fleur impatiently, sucking up the melting snow they tracked in with her wand. “Honestly, can’t you….” But before Fleur could finish scolding them, Bill, Percy, and George, dressed in work robes, came through the front door with…. a goblin? The four never paused their animated conversation as they shed cloaks and scarves everywhere.

No sooner had the front door closed than it banged open again. Parvati’s sister Padma rushed to the kitchen fireplace with an Indian boy in tow, transfiguring a blanket as they ran. They were both snowy wet, and the boy’s teeth were chattering. Padma threw the blanket around him and said to Hannah, “Varun didn’t know England would be so cold!”

As the Quidditch players and business travelers took over the kitchen table, a cheer rose from the living room. “I’m doing it! I’m doing it!” cried Molly. Arthur quickly went to look, and saw Molly floating near the ceiling!

“Molly! Be careful!” he shouted.

“What’s that, Arthur?” She turned, waved, and came tumbling down! Before Arthur could draw his wand, she bounced off the floor!

“Whoops! I’d best be mindful of my knickers!” she giggled as she sailed across the room.

Arthur spun around again at the sound of yelling from the kitchen. Dean, Luna, Seamus, and Serena had arrived, and Serena had brought girls Arthur hadn’t met before. Ginny shrieked, “Stephanie! Nari!” and they all shouted and hugged and jumped up and down. Parvati ran over and joined the squealing scrum.

Arthur was amazed that he could hear anything over the screeching, but there was a crack of apparition outside, and a moment later Hermione raced in, shouting, “I did it, Ronald! I won! I won!” What she won, Arthur didn’t learn, because all of a sudden there was a lot of kissing going on.

“What’d she win?” asked Seamus, but Arthur didn’t hear the answer, because large trays bearing mugs of cocoa floated over the table, and suddenly the clamor got ten times louder. Molly, Tracey, Neville, Hermione, and Ron joined the crowd. How on earth did they all fit in the kitchen?

But as Fleur’s treats came out of the oven, and Hannah supplemented the cocoa with tea, and Serena’s friends passed around American-style hot sandwiches, the crowd began to drift off in twos and threes and fours to eat and drink and talk.

Charlie, Padma, and Verun, who looked much warmer, ate biscuits and conversed on the living room hearth.

Harry and Ginny shared a plate of sandwiches at the game table with Stephanie and Nari, who seemed to be a couple.

Seamus, Serena, Percy, and the Goblin, whose name was Garreck, conversed earnestly over mugs of tea by the bookshelves.

George, Tracey, Neville, and Hannah sat on the sofa and leafed through a levitating book of famous gardens.

Dean, Luna, Ron, Hermione sat on the floor and played a Muggle card game, while Bill and Fleur were tucked away in a corner, in their own little world.

The voices grew softer and softer, until you could just hear Celestina Warbek singing at low volume on the wireless. Arthur grabbed a mug of tea and sat next to Molly on the loveseat.

Peace descended upon the Burrow. 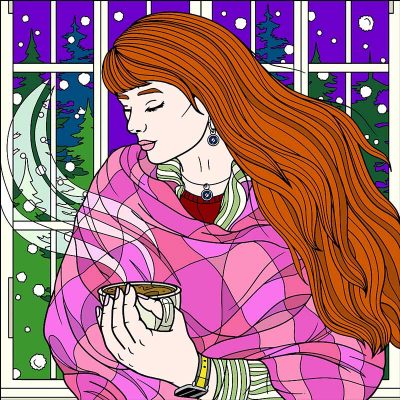