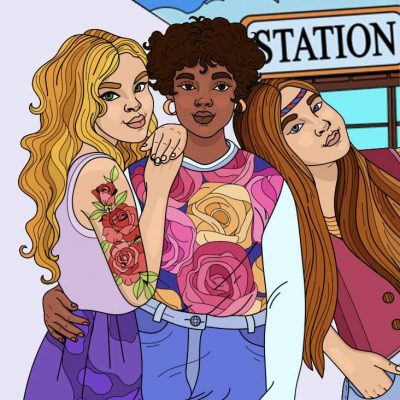 Hermione Granger felt confident as she patrolled Platform 93/4, striding the length of the Hogwarts Express and back again, keeping an eye out for early-arriving First Years and Primaries. Hermione never gave much thought to fashion, but she did feel very professional in her new robes. It was very generous of George to have purchased matching, high-quality robes for all of the Tutors and all of the team captains. (Hermione suspected that he’d included the captains so that he’d have an excuse to buy a nice robe for Ginny.)

Hermione, Parvati, Neville, Terry, and Davis had traveled from Hogwarts to Kings Cross on the Express, but Ron, Seamus, and Serpentia had left the night before. Hermione, approaching the train’s midpoint, swept her eyes up and down the platform in search of Ron. She didn’t see him, but something else caught her eye.

It was a group of older girls, sixth through eighth years, all in quality robes, faces expertly made up, hair fashionably styled. Hermione recognized a few of them: Parvati, Lavender, Runcorn, Davis. They were all looking at something. As she approached them, their hard glare gave Hermione pause, and she steeled herself against the malevolence that seemed to be directed at her. But their gaze swept past Hermione, and she saw that they were staring down Pansy Parkinson, who hurried by, head bowed, not making eye contact with anyone.

Hermione had never liked Parkinson, who had bullied her with insults throughout their time at Hogwarts, and who had also called on the students to turn Harry over to Voldemort during the Great Battle. But now Hermione was surprised to find herself feeling sorry for Pansy. The Parkinson’s family’s home had been destroyed after the war. Her younger sister had been packed off to Beauxbatons. Her closest Slytherin friends, Millicent Bullstrode and Daphne Greengrass, were not returning to Hogwarts. Her boyfriend, Draco Malfoy, was rumored to be overseas with his mother.

Hermione started to follow Pansy to see if she were all right, when she heard someone call her name.

“Hey, Granger!” It was Tracey Davis. Hermione paused and looked. “Granger, get over here!”

Davis sounded very rude, but Hermione saw that Parvati was also waving her over.

What did they want? Was it Tutor business, or were they warning her away from Parkinson? If it were the latter, then what Hermione did next would have great ramifications for the rest of her year. She stood, frozen, unsure of what to do next.

Her dilemma was solved by Terry Boot, who jogged past her toward the group, calling over his shoulder, “C’mon, Hermione! Tracey has our assignments!”

So it was Tutor business. Hermione was relieved, but only a little. She felt certain that she would face this choice again.